66 The Label – What We Learned from Stephanie Grisham’s Trump Tell-All, I’ll Take Your Questions Now. In her new book, Stephanie Grisham reveals a peek behind the scenes of the Trump White House, “where everything was like a clown car on fire running at full speed into a warehouse of fireworks.” 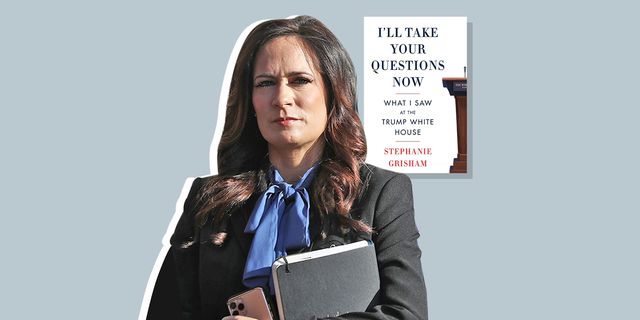 Another day, another Trumpworld memoir. The latest damning dispatch from the Trump Administration comes courtesy of Stephanie Grisham, who served various roles in the White House throughout a four-year period: communications director and press secretary in the West Wing, as well as communications director and chief of staff in Melania Trump’s East Wing. In I’ll Take Your Questions Now, her new memoir, Grisham depicts a White House “where everything was like a clown car on fire running at full speed into a warehouse of fireworks.” Caught between the president’s abusive leadership style and the conflicting loyalties she felt toward the first lady, Grisham’s final straw came on January 6, 2021, when she tendered her resignation hours into the insurrection at the Capitol.

The Trumps, for their part, have already moved to discredit Grisham. Describing Grisham as “very angry and bitter” after a break-up, President Trump said in a statement, “Stephanie didn’t have what it takes and that was obvious from the beginning. She had big problems and we felt that she should work out those problems for herself. Now, like everyone else, she gets paid by a radical left-leaning publisher to say bad and untrue things.” Melania Trump also clapped back, saying in a statement, “The author is desperately trying to rehabilitate her tarnished reputation by manipulating and distorting the truth about Mrs. Trump. Ms. Grisham is a deceitful and troubled individual who doesn’t deserve anyone’s trust.”

Grisham’s account, like any Trumpworld memoir, must be read with a healthy dose of skepticism. After all, as Grisham herself admits, “Casual dishonesty filtered through the White House as though it were in the air conditioning system.” But Grisham anticipates that readers may not take her account at face value, writing, “This is not, by the way, a book where you need to like me.” We read I’ll Take Your Questions Now in advance of publication; now, we’re breaking down the biggest bombshells below.

First up: Grisham offers insight into the daily routines of the first lady, and the derisive nickname they inspired:

I could count only a handful of times over the years that Mrs. Trump was actually in her office. She preferred to run things via text or phone calls, which initially made it hard to set an agenda and form a close working relationship. Mrs. Trump was working from home long before the country was… the First Lady kept to her rooms in the residence. That became a running joke among those who knew her. The Secret Service unofficially dubbed her ‘Rapunzel’ because she remained in her tower, never descending. In fact, some agents tried to get assigned to her detail because they knew the First Lady’s limited movements and travel meant that they could spend more time at home with their families.

According to Grisham, there was no lost love between Melania Trump and her stepchildren, particularly Ivanka Trump:

Ivanka was constantly getting into the press shots that truly should have been reserved for the president and first lady. It was yet another example of the Kushners putting themselves on the same level as the first couple, and it was unseemly. For Mrs. Trump, it was about protocol and the rules; or all of us as staff, it was about allowing her to be in her role and have the people of the United States see her representing them with dignity and class… Mrs. Trump seemed relieved to see that I shared her frustrations with her daughter-in-law, so much so that she eventually let me in on the nickname she had privately given her: ‘the Princess.’ Many times after that I would hear one of her favorite stock complaints, ‘Princess always runs to her father.’

Jared Kushner is described as “Rasputin in a slim-fitting suit.”Anadolu AgencyGetty Images

Inappropriate behavior on the part of the Kushners earned the couple their own derisive nickname. “Because they dabbled in a bit of everything and could be precocious and self-absorbed, we in the East Wing dubbed [the Kushners] ‘the interns,’” Grisham writes. “Mrs. Trump was amused and herself used the nickname every now and then.” Tension between the East Wing and the Kushners is an enduring theme throughout the book, with Grisham continually emphasizing the conflicts of interest proposed by the Kushners’ role in the administration. Take, for example, the matter of Jared Kushner’s security clearance:

The greatest irony, of course, was when I heard that Jared Kushner never got a security clearance because of all of his issues, financial interests, and so on. As far as I know, he only ever got the most basic clearance, yet he was in all of the most important meetings of the administration. He also reached out directly to many heads of state, such as Benjamin Netanyahu and the leadership of the Saudi government, something no staffer should ever do, let alone if they had no top security clearance.

Remembering when Kushner teamed up with speechwriter Stephen Miller to write a televised address at the beginning of the COVID-19 pandemic, Grisham writes at length about what she saw as Kushner’s poisonous influence in the White House:

I had shared with Mrs. Trump many times my opinion that if we lost reelection in 2020 it would be because of Jared. She didn’t disagree with me. It was my fervent opinion that his arrogance and presumption had grown over the years, and he threw his power about with absolutely no shame. I would venture to say that being in the White House changed Jared as a person. There was no reason that he should be sitting with the speechwriter laying out our nation’s plan to fight a global pandemic. And I knew that if things went badly with the speech, which felt inevitable, he would be the first person to say in the president’s ear that the comms team had fucked it all up. He was Rasputin in a slim-fitting suit.

But the Kushners aren’t the only Trumpworld acolytes to come under fire in I’ll Take Your Questions Now. Grisham doesn’t mince words when writing about Trump sycophant Lindsey Graham:

Lindsey Graham? Well, it struck me that he was using Trump to mop up the freebies like there was no tomorrow (seems that he still is). He would show up at Mar-a-Lago or Bedminster to play free rounds of golf, stuff his face with free food, and hang out with Trump and his celebrity pals. On one occasion, I came across him at Bedminster after he’d kicked out a White House staff member so he could take her room. Senator Freeloader was sitting at a table by the pool, a big grin on his face, lapping up the goodies he was getting like some potentate. He said to me, with a creepy little smile, ‘Isn’t this great? Man, this is the life.’

Grisham, like many other Trumpworld alums, takes note of Trump’s obsession with dictators. But it’s her recollection of 2019’s G20 Summit in Osaka that’s the most chilling, suggesting an all-too cozy rapport between Trump and Vladimir Putin:

Trump would usually spend a minute or two talking about what ‘animals’ the reporters could be, and then the press would come in. With President Putin, Trump started out the same, then changed his tone. With all the talk of sanctions against Russia for interfering in the 2016 election and for various human rights abuses, Trump told Putin, ‘Okay, I’m going to act a little tougher with you for a few minutes. But it’s for the camera, and after they leave we’ll talk. You understand.’

The most interesting moments in I’ll Take Your Questions Now come when Grisham offers a look behind the scenes of memorable moments. Take, for example, her recollections about the hand slap heard ‘round the world. In 2017, Melania Trump made headlines when she appeared to slap her husband’s hand away during a diplomatic visit to Saudi Arabia in 2017. The truth, according to Grisham, is less interesting: